Posted on April 4, 2018 by The African Geek Girl Leave a comment

My love of all things Dragon Age is well documented. What is significantly less well-documented is that I’m also a fan of Felicia Day – yes, because of The Guild.

These two pillars of nerdy awesome sauce came together in the Machinima production of a web series based off of the Dragon Age games, which gave us a little bit more insight into life in the Qun. I’m pretty sure that for those of you who love fantasy and sci-fi books, shows, games and movies as much as I do… Dragon Age: Redemption has been watched and re-watched so many times you even know the episode in which the scene captured in the banner below occurred. But bear with me, for the sake of the less obsessed 🙂 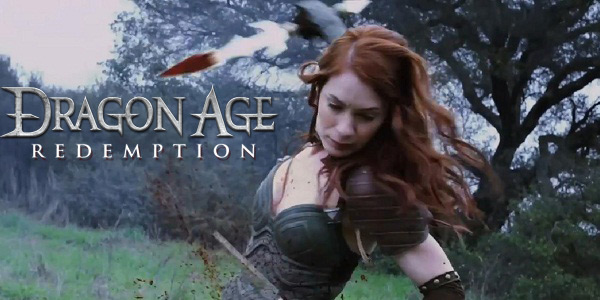 Dragon Age Redemption was the brain child of Felicia Day, according to the show’s page on Bioware’s Dragon Age site. She was looking for something to do after The Guild, and presumably had spent more time playing the games than I had and so she thought: Yep, let’s do this. And so she did it. Redemption is set in the same time frame as Dragon Age II and follows Tallis, an elven assassin working for the Qun who has fallen out of favour. When a rogue mage escapes the Qun’s grasp (or clutches, depending what you thought of them) she’s sent out to hunt the mage down, and given the title of Saarebas. Along the way, Tallis is forced to team up with a rag-tag band, all seeking the same thing (kind of) and together they face the evil, wicked mage.

As fantasy goes, it’s pretty standard fare and even flows like an RPG. At point A, we meet the main character, who may or may not be a hero. At point B we are introduced to the challenge at hand. Point C, we’re sent to go fix problems. Along the way to Point D, which is ‘problem solved’ (or… you know, not. Depending on how you play) we meet our sometimes-merry, sometimes-bloodthirsy band of companions. They even gave us an Alistair-Lite, for those of us who felt nostalgic.

Redemption is 6 episodes long. If you really want to, you can finish the whole show in one sitting. The episodes are substantial, by web show standards, and they pack in a lot of lore and action each. If you’re looking for something to put on in the background that doesn’t require you to pay much attention, this isn’t the show for you. Day is a great story teller and she walks us into one of the most elaborate and complete fantasy settings of recent times; so even if you want to be distracted, it’s pretty difficult.

What I enjoyed most about Redemption was its attention to detail. From the opening to the closing scenes of the show, so long as you’re doing your bit with the suspension of disbelief, this show is doing its bit by never falling out of character. The mage never appears uncomfortable or awkward casting imaginary spells. The elf never looks like her ears are falling off. Alistair-Lite never stops doing silly things… It’s beautiful, really.

If you’re not so much into fantasy yet, then this show could go a little too deep too fast for you. It was made, primarily, with fans of the games in mind. We already know the world and we have a vague idea of what the Qun is about and what it means to be an elf or a mage, etc, in the Dragon Age setting. However, I wouldn’t say give this show a total miss if you’re not already into it. Try it on for size. They do a good job of letting you know the basics of what’s going on; it’s a good story and there’s quite a few laughs and heart-warming moments to be had. And who knows… you could end up really getting into the whole mythos and playing the games… or reading the Wiki. Whatever floats your boat. Nerdiness comes in all flavours.

Linda, AKA TAGG herself, loves great music and terrible movies. Find her being geeky on Twitter @africangeekgirl

Almost 30 is the show every 29 year-old should watch

This site uses Akismet to reduce spam. Learn how your comment data is processed.